9th APRIL, 2015. The OpenMP Architecture Review Board (ARB) today announced that it is now taking submissions for OpenMPCon 2015, its annual developers gathering focused on the practical application of the OpenMP API.  James Reinders, the industry luminary and chief evangelist, Intel Software will provide the events inaugural keynote, titled: “OpenMP in an era of Ubiquitous Parallel Computing”

“OpenMP is needed more than ever to deliver high-performance compute in this era of parallel computing and I’m delighted to welcome James as our first keynote.” said Michael Wong, OpenMP CEO. “There are few people better placed to explain the vital importance of OpenMP given the scores of projects he has recently been involved with.”

OpenMPCon takes place 28-30 September in Aachen Germany and will focus on the practical application of OpenMP and other directive based languages to deliver high-performance computing through parallel processing.

Submissions are requested from industry experts, developers and academia on all topics related to OpenMP, including but not limited to: application development from any discipline, algorithms, performance analysis, tools and libraries, optimization, verification, portability and education. Sessions can be in the form of technical presentations, tutorials and workshops, posters or panel discussions.

OpenMPCon is organized by and for the OpenMP community and is uniquely positioned to provide both novice and experienced developers new insights into using directive based APIs such as OpenMP.

OpenMPCon is partnering closely with its sister-event IWOMP (the International Workshop on OpenMP) which will be holding its annual conference at the same location immediately after OpenMPCon. IWOMP’s focus is on presenting the latest research ideas and results relating to parallel programming with OpenMP. Delegates are encouraged to attend both events and discounted ‘attend-all-sessions’ tickets will be available.
For additional information and to submit a proposal visit: http://openmpcon.org and follow @OpenMPCon 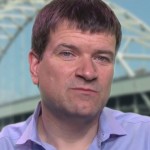 Digital media files of Michael Wong and James Reinders can be found at: http://openmpcon.org/imagebank/

James is a Director, Chief Evangelist at Intel Software and has contributed to numerous projects including iWARPas well as the world’s first TeraFLOP/s supercomputer (ASCI Red) and the world’s first TeraFLOP/s microprocessor (Intel® Xeon Phi™ coprocessor). James has authored numerous technical books and is collaborating on many more, one of which is targeted to appear by OpenMPCon.

The OpenMP ARB has as mission to standardize directive-based multi-language high-level parallelism that is performant, productive and portable. Jointly defined by a group of major computer hardware and software vendors and major parallel computing user facilities, the OpenMP API is a portable, scalable model that gives parallel programmers a simple and flexible interface for developing parallel applications for platforms ranging from embedded systems and accelerator devices to multicore systems and shared-memory systems. The OpenMP ARB owns the OpenMP brand, oversees the OpenMP specification and produces and approves new versions of the specification.